To SAG or not to SAG?

I produced two features and several shorts non-union before I took the plunge and finally produced a low budget feature under a Screen Actors Guild contract (SAG, now SAG-AFTRA). When I first started, I Googled around and all I found were horror stories. It made me nervous. Would they make the process difficult for me? Would they rob me of all my money? Would they scam me?  In short, no, none of these things happened- they were fine to work with, the expense of making a union film vs. non union is very minimal and there’s some paperwork involved.  My hope is that with this article, you’ll figure out if going union is the right choice for you and if it is, it’ll be encouraging enough to at least pick up the phone and talk to them about making your project a union film.

I’m targeting micro budget filmmakers out there- if you have more than $200K for your film, please, hire a UPM or Line Producer who’s done this before and you have enough money to not worry about this stuff beyond educational purposes.

The basic gist is that to use any SAG actor you have to become a signatory with the union. That means you sign a contract with them, agreeing to play by their rules. There’s a bunch of paperwork to do, letting them know things like your budget and cast list. SAG actors aren’t allowed to work for you unless you are a signatory. You’ll have to pay a smidge more, because on top of what you pay the actors you’ll have to pay the union pension & health. Not too bad, right? Let’s look at some of the nitty gritty.

Is there a benefit to going SAG?

It depends on your cast and your performance needs. Does your cast skew pretty young? A dramedy or horror movie about 20/30 somethings trying to figure out life/love/career/getting away from zombies/vampires/monsters/serial killer or whatever? Then, probably not.  Stick with non union.

If you have a handful of actors over the age of 30, or very specific requirements for your casting, then I would open it up and cast the wider net to union actors.  I find most working actors over 30 tend to be union, while there are plenty of talented younger working actors that haven’t been able to stomach the $3K initiation fee to join yet.  You’ll find plenty of young actors that have been sitting on their SAG Eligibility for years upon years, waiting to justify the expense of joining the union.

No.  SAG-AFTRA actors are not indicative of better talent, but it does give you a much larger pool of actors to draw from. You only need three background vouchers (from working as an extra) to become SAG eligible. That is not an indicator of acting chops! I find the pool of good/not-so-good to be about the same in SAG or non-SAG actors. AEA (the theatrical union) actors on the other hand, tend to be talented pool of actors.  AEA has higher standards for membership than SAG-AFTRA. That’s not to say SAG actors aren’t great; that’s to say there’s plenty of bad with the good.

Does it cost anything?

Of course, if you have ZERO dollars to make your project, it’s not for you.  Just do a non union feature.  On the other hand if you have a modest budget and you’re only hiring one or two SAG actors- the fees won’t make a difference.

There are also deferred payment options, but that’s a different rabbit hole for another day.

It depends on what kind of project you’re doing: feature, short, webseries?

Here’s one note about features- you have two choices: Ultra Low Budget (must be under $200,000) and New Media. Each has their pros and cons.  While filmmakers gravitate making their low budget features under Ultra Low Budget, I would recommend doing  your project under New Media.  Here’s why:  If you do an ULB contract, you will need to give a bond (think of it like a security deposit) for your SAG Actors- they’ll ask for either 40% or all of their full payment up front. The amount seems arbitrary- I’ve done a feature where they only required 40% and another where they asked for full payment up front. This is not in place of paying your actors- you still need to pay them on set and the bond will be returned to you when you hand in all your paperwork (more on that below). The benefit of ULB is that it accounts for theatrical release of the finished film. But… 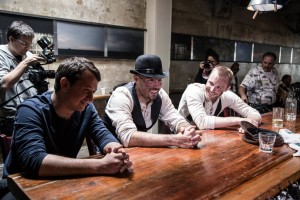 Dinner With the Alchemist uses a variety of union and non-union actors. Generally the younger actors aren’t SAG yet. (Photo by Jeff Caplan.)

A lot of filmmakers have big dreams about their film becoming the next Clerks or Blair Witch Project or Paranormal Activity, etc. But most independent features will live online. If you do your project under New Media it still allows you to take your film on the festival circuit and monetize it online, but limits theatrical & DVD distribution. It allows you to negotiate any rate you want with your actors (down to minimum wage) and if you get lucky at the festivals and big distribution deals are knocking– well, you’d need to upgrade your contract anyway (which you would need to do for a ULB feature also, cause it doesn’t allow for DVD, TV, or monetary online release.)   More on upgrading another day. For now: be honest with yourself about the chances of a theatrical release. You might manage to keep your up-front costs down.

More on criteria for contract types for other things such as student and short films are available on SAG’s website.

Once you’ve figured out your contract type you (as an individual) or your company (production company, LLC) have to fill out an information sheet to become a SAG Signatory.  Being a signatory means that you’ve signed a contract with SAG agreeing to play (and pay) by their rules, thus allowing their actors to work for you.  You’ll need to fill out a bunch of information- mostly contact information, start and end date of your production, budget, number of cast, pre-production cast list (only SAG Actors) and provide some documentation- like a photo ID for individual or your business certificate if you’re a company.  This costs no money.

Then you need to apply your specific project- you’ll need to send in a script, budget (a basic top sheet budget is fine) and preproduction cast list.  Do this at least 3 weeks before you start shooting! I believe SAG AFTRA offices tend to be understaffed and it takes a while to go through every project that gets submitted, so the earlier the better before your first day of filming.

One of the reasons I like producing under SAG AFTRA is that is requires reasonable working conditions. You’re limited to 12 hour days, need to break for food before 6 hours into your day, have to pay your actors $100 per day (for ULB) or at least minimum wage (for New Media), etc etc etc. If this is your first time working on a SAG production, I would meet with your local SAG rep and they’ll talk you through all the nuances. Good working conditions don’t just benefit your SAG actors. They’re a great piece of discipline to keep the set positive, keep everyone rested and fed and healthy, and prevent over-zealous filmmakers from driving everyone into the ground with an 18 hour day. Filmmaking is a marathon. These restrictions are all good things. 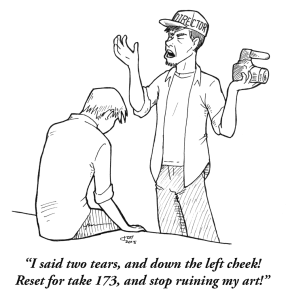 You’ll need to have them fill out a tax form (W-9 or W-2, whatever you’re doing), a SAG Performer’s Contract, and a timesheet (Exhibit G) for everyday you’re filming.  You’ll need to turn all of this in, dates your SAG actors were paid (I always take a photo of the check), a check to the SAG Pension and Health (17.3% of your SAG’s actors salary) and your project’s budget when you’re finished.

Your rep will probably call you the first day of production to check in.  This is normal, this doesn’t mean you’re in trouble.  They also may show up on set.  Don’t worry, also normal.  They’ll also call your SAG actors and check in to see how things are going- also normal.

After wrap you’ll have some paperwork to get to SAG: a SAG Performer Contract, Exhibit G’s, Final Cast List, Budget and SAG P&H Check. All the paperwork is downloadable from the SAG AFTRA website.

Here’s the thing.  It’s really not an evil union, they’re reasonable people.  I’ve fumbled many times as a producer- had to push my shoot, extend the shoot, recast, fire an actor, etc.  I even once had an actor lie about her union status on a union film shoot because she assumed we were non union- our project was flagged when they scanned our final cast list.  There was no fire and brimstone, they just wanted to make sure she got paid and 17.3% was sent to SAG P&H. Once I took care of that promptly for her, my project was cleared.  They get it.  Filmmaking is tough and things are bound to change/fumble/whatever- just be upfront and straight with them and I guarantee you’ll run into no problems.

You can start by going to their online signatory process page.

I know I skimmed over a few topics that you’re probably thinking- wait, what about the _________! There’s a lot and there’s no way I could have covered it all with just this one article.  Mostly, I’m hoping Jenna from four years ago who was feeling pretty skeptical about producing under SAG would read this, giving her courage to at least check it out and get a SAG rep on the phone.  It seems daunting, but trust me- it’s not rocket science, if I did it (again and again and again) so can you.

Of course, let me know if you have any other questions and happy filmmaking!